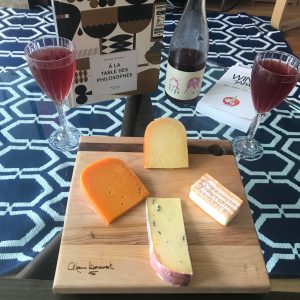 My friend posted that question to the above photo on the socials. Pet-nat is the shortened version of petillant natural, i.e. the old school way of making fizzy wine…before champagne, before prosecco, before the sodastream (no joke – many cheaper fizzy wines are run through a sodastream to give them bubbles).  Basically, wine that hasn’t finished fully fermenting is bottled and sealed.  The carbon dioxide from the chemical reaction gets captured within the bottle, making the juice fizzy.  Often, the winemaker will use some kind of wild yeast, which can make for a really unique flavor profile that you won’t get with mass market wines.

As you know, I LOVE Australian wines & winemakers.  Most of the really innovative tastes are coming from there, imho.  I actually feel like that can be said about their art, music, fashion, food – anything really.  There’s something about Australia that’s so unique and it comes through in so many things.  Anyway, the last 4 or 5 pet-nats I’ve had have been from Australia.  In general, it seems like they’re not super easy to come by here or in Australia.  If you’re interested, I have seen some French ones at some boutique wine shops in Boston.

This particular one that we had yesterday, is from Jauma Vineyards in McClaren Vale, SA and it was SO good.  On its own, it reminded me those Swiss blackcurrant pastilles with alpine herbs and was very dry.  Oddly, the cheese we paired with it completely crushed it.  I was really surprised.  Although, the truffled gouda from Whole Foods had very pungent truffle shavings.   When P unwrapped it, you could probably smell the truffle down the hall & out the front steps.  It’s the only time I’ve ever had a truffle crush a wine.

Because it was so organic & local to its region, I assume it would go best with bread & cheese from SA.  I did rummage through my cabinet & found a bag of salted potato chips made in the Pacific Rim (potatoes grown in Japan), which were amazing  with it.

Verdict: delicious, light, dry & perfect on its own or a pairing with organic Australian food, if you can find it.