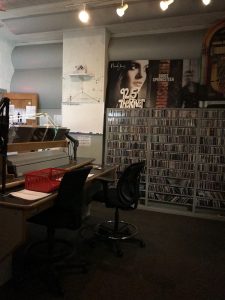 I seriously thought I was going to die in this building.   Actually, something did happen last Spring where that was a distinct possibility…but I had that day off.  So, here I am.

After a super long run, I’ve decided to leave The River.  It wasn’t a quick decision or prompted by a singular event.  Over the past couple of years, the logistics of traveling close to 100 miles round trip by car or taking an expensive, unreliable, inconveniently scheduled train just started to chip away at my overall enjoyment.   After working a really long work week, facing another long day, made so because of transportation, became daunting.   In the Fall,  I just threw it out to the universe that I was open to something new.

From time to time, I get pinged by radio people in and out of the market, asking me if I am interested in any “potential opportunities”.  Despite having passing regrets about not taking that morning gig in Dubai in 2002 or that thing in California in 2005, I’ve been relatively satisfied with my choice to stay at The River.

The Fall passed in a blur, with me working, working, working at both jobs.  The week before Christmas, around 8p, my boss pulled me into her office and told me I had to take my vacation, starting now.  I had accrued 3+ weeks and taken one day (oops!).   All of the sudden, everything in my life just went quiet.   10 hours later, I had an “inquiry” in my email box from a station that I had been into for years.

After a few conversations and a meeting, I decided to take the new gig.   The acceptance timed out with a planned vacation; therefore, I was able to sneak away without being disruptive.  Plus, I hate goodbyes, so, it really worked out.  Initially, I just felt relief because I would never have to sit in a random yet regular Saturday morning traffic back up on 495 or pass time on a 2 hour train ride.  Although, the more it’s sinking in, the more excited I am about the idea of doing something new and making new friends.  I am all about the adventure and I know this new opportunity is going to be full of them.

Ultimately, I loved my time at The River.  I met so many great people – both coworkers & artists.   In the end, I simply had SO MUCH FUN.  SO MUCH FUN.  More fun than I ever imagined.  Even though the building sits on a giant sinkhole, it has a pretty cool vibe.   As I was leaving for the last time and turning off the lights, I meant to say thank you for all the amazing experiences.  Since I didn’t say it then, I’m saying it now.  <3