Back in the Fall, I found myself with some free time to plow through my stacks of Netflix dvds & books.  Over the years, I’ve been given some crap that I still get the dvds, but they never stream indie or foreign films. So, je n’en ai rien a foutre.

One of the dvds was “Blood Into Wine”, the doco about Maynard James Keenan’s vineyards in Arizona.  Overall, the documentary was an interesting perspective on wine as it was half about the artistry of wine and half about responsible farming & environmental issues.  The real star was in Eric Glomski who was a river ecology major, which translated into restoring the land in Arizona.

After watching the movie, I purchased 4 wines from Caduceus – a red, a white, a rose, & an orange.  The first one we dipped into was the Primer Paso red blend, which was made in the style of Cote Rotie.  As a comparison, we cracked open a Field Theory Aglianico from Paso Robles.  The comparison I was after was not grape to grape but more new world trying to be innovative vs. new world trying to be classic. For a meal, we decided to do Pacific Rim style duck, i.e. roasted with soy sauce, molasses, and orange.

First, we tried both on their own: 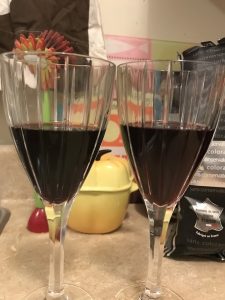 Since the alcohol content of both were >13%, we decided to have some snacks while were cooking: 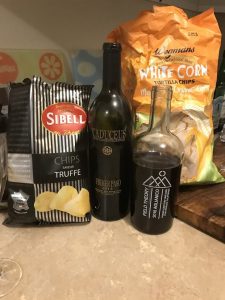 We chose truffle potato chips from MA France and white corn chips from Wegman’s.  Perhaps not surprising, aside from the salt, neither chip held up to the wines.

For the main course, we did the duck, fries with French aioli, and green salad: 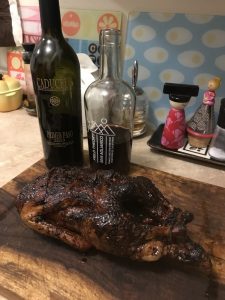 Both wines complimented the duck well.  The Field Theory kept it’s fruit, whereas the Caduceus veered more dry & spicy.  Oddly, we felt that Caduceus made us feel like we were eating in Europe & the Field Theory like California.

Verdict: Either! Depends on budget and where you’d like to “go” for dinner 🙂