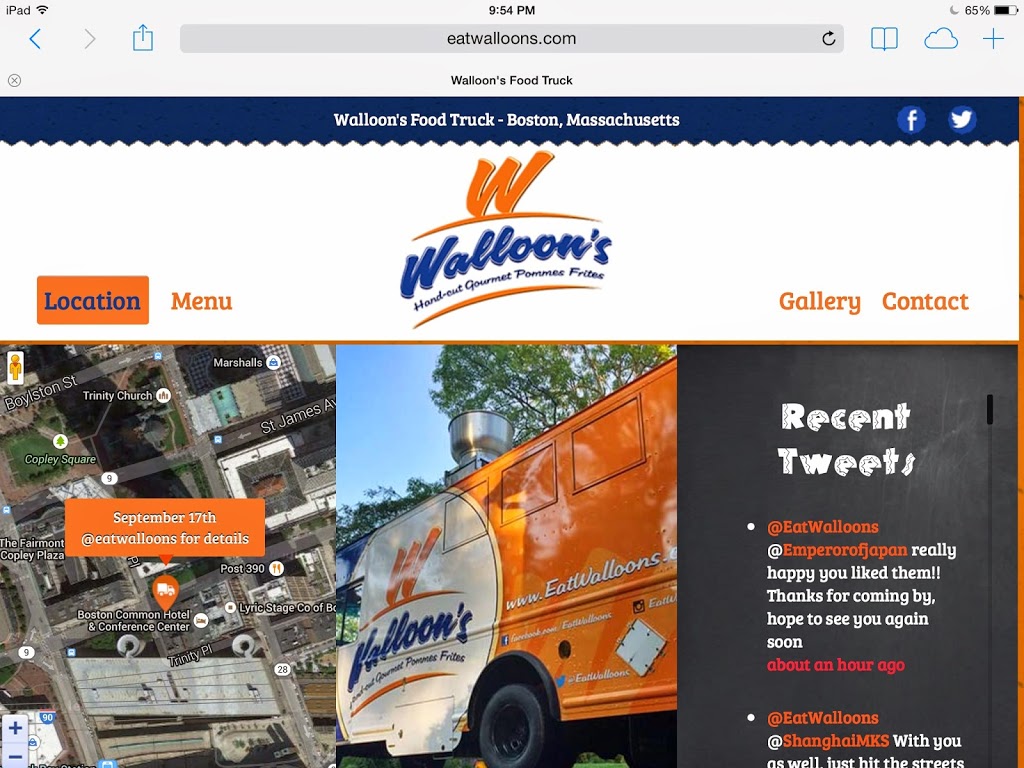 I love fried potatoes. There. I said it.

French fries seem to be a popular snack in a few European countries & in Quebec…but in the US?  Not so much – which is a total drag if you ask me.  I am guessing with the resurgence of whole food eating, having a treat of fresh potatoes cooked in real fat once in a while has become permissible, if not downright trendy.

A few months ago, I heard about the Walloons Food Truck & have been waiting for them to start rolling.   Today, I realized they were going to be out & about in an area where I may be finding myself.  Success!!! I was able to catch up with them before they closed up.

Phil ordered poutine & I had a regular cornet with maple mayo – which tasted like the maple cured bacon my mum used to get in the 70s.  Both were SOOOOOOO delicious.  The portions were just right.  The frites were crisp & tasty and not heavy at all.  The best part? They totally validated my existence on social media:

That’s me on the Twitters!!! I am the Emperor of Japan!!!
Do yourself a favor & check out their fritekot.  It’s a lot of happiness for $5!

Last night (Saturday), exciting person that I am, made myself a big salad & turned on tv.  JACKPOT!!! Never Tear Us Apart, the INXS miniseries was on Showtime.   INXS was band I’ve always loved. If “Kick” came out today, it would not sound out of place.  Aside from the music, they had a really charismatic lead singer who had a whole load of lady drama.  While the miniseries didn’t get into the whole J.D. Fortune/Terence Trent D’Arby era of the band, their early history is more than enough fodder for 3 hours of engrossing entertainment.

One thing that strikes me about music movies – most of the time, the actors don’t actually look like the musicians. However, all you really need is some strategically worn accessories and everybody knows who you are.  In this case, the guy who played Michael Hutchence had long curly black hair & a lot of flowy shirts.  The guy who played Bono appeared to be short with a goatee, military style hat, & red sunglasses.  In The Runaways, Kristen Stewart wore a pink blazer when she was “solo” Joan Jett.   Problem solved!

Anyway, watching the miniseries made me want to compile of list of my favorite music movies.  Here goes:

Dramatizations
1. The Runaways – Based on Cherie Currie’s book, “Neon Angel”. Floria Sigismondi put a lot of thought into how she wanted the movie to look, i.e. very shiny for the Japan scenes, etc.. This is one of my favorite overall movies.

2. Gainsbourg: A Heroic Life – This could also be put on my favorite movies made from graphic novels list. While it’s based on a comic book (Hello, Brigitte Bardot!), it’s a live action, irreverent take on Serge’s life.  It did leave out his infamous appearance on the talk show with Whitney Houston but it was outstanding.

4. 24 Hour Party People – Rise & fall of the Manchester scene in the 80s.  This is a movie where most of the actors didn’t look like the musicians but they all had defining haircuts & accessories.  They did an especially good job giving the Ryder brothers bowl cuts & boxy sweaters.

5. Hillary & Jackie – File under: Family secrets are stranger than any fiction

Documentaries
1. Talihina Sky: The Story of Kings of Leon – In the early 2000s, I had multiple tickets to see this band & they never showed for any of the concerts.  After watching this, honestly, I am surprised they were even functional enough to form a band.  It was an accomplishment to transcend their upbringing & get it together.

2. Anvil: The Story of Anvil – This is what happens when you never stop chasing your dreams.

3. I Am Trying To Break Your Heart – Behind the scenes look at Wilco’s recording process and a peek into how bizarro being signed to a major label can be.

4. Lemmy – He seems like such a nice, regular guy!

5. Dig – Comparative documentary of the Dandy Warhols & Brian Jonestown Massacre.  How do the fates decide who gets the buzz & the attention in the moment?

Matt Phipps, our afternoon DJ, recommended the Big Star documentary to me.  I need to put in my Netflix queue. If you have any recommendations, please post them in the comments! 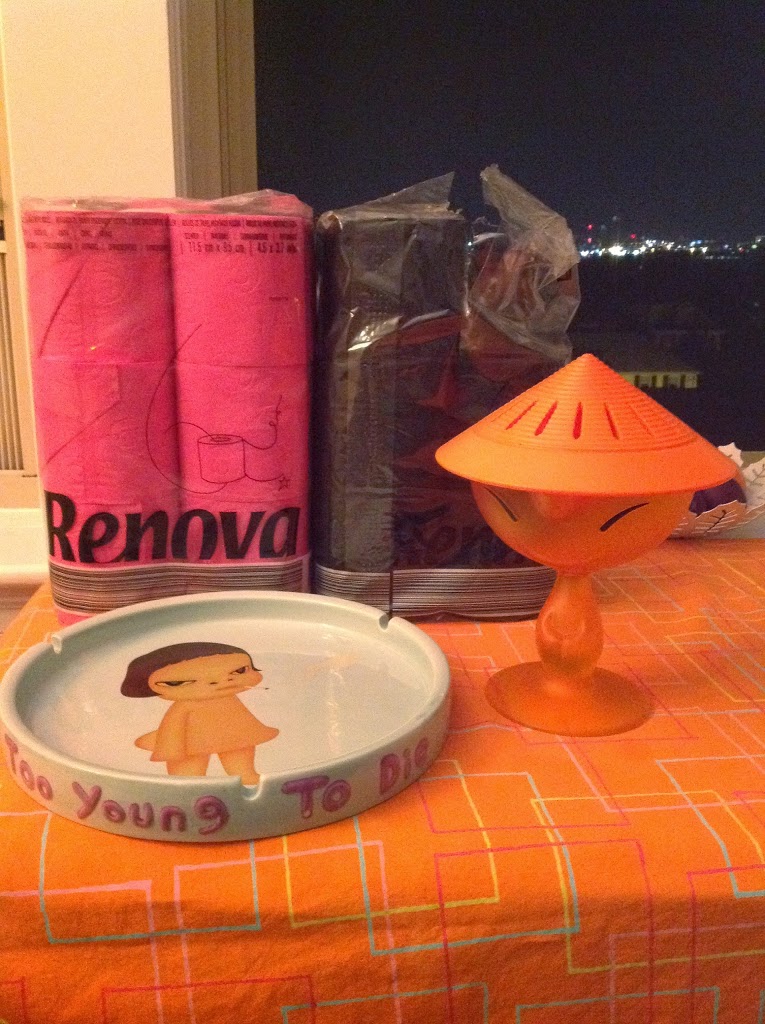 Last year, a very dear friend of mine recommended the book, Happy Money. So, now I’ve been recommending it to anyone who will listen.  The basic tenet of the book is that money inherently doesn’t make you happy but how you use it does.  Buying experiences is often more fulfilling than buying things. Spending money on others also brings deep satisfaction.

Randomly, many people I know have been moving into new digs lately.  I’ve found myself at a bit of a housewarming gift giving crossroad.  What do you buy for people who not only have as much as they care to have but also value experiences over things? And, what about your natural inclination to use your money to make somebody else happy?

Of course, there’s always wine & fancy food treats…those do a good job on the “experience” piece. What if you find that special “something” that is equal parts experience & stuff? Now, that’s special!

Here are recent gifts that I’ve given as housewarming prezzies:

1. Yoshitomo Nara Ashtray – Remember when all good hostess sets came with a fancy ashtray? I don’t know anyone who smokes anymore…but it’s so ridiculous & can double as a candy dish.
2. Alessi Mandarin Juicer – I am such a fan of Alessi & Koziol – functional art!!! Plus, you can squeeze juice for your sweetie.
3. Renova Paper Products – Black toilet paper is an unbelievable conversation starter.  There are only certain friends who would really dig a few rolls of chartreuse paper towels.  So, this isn’t a gift for everyone BUT for the right person, it’s downright amazing – and practical!
I’ve found great gifts at Uncommon Goods, Bliss Home, & Finn Style (oh Finn Style, I love you & your Marimekko & your Iittala & your Fazer bars).  If you have any great recommendations for gifts, please share them in the comments!